"Things are gonna change, I can feel it." Was Beck talking about Sedona? Probably not, but things ARE changing in Sedona and we like what we're seeing down in that thar red rock country. 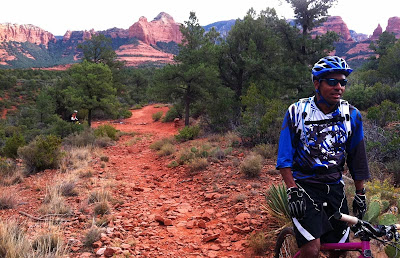 Before "we" go any further let's change it to "I", Matt the Janitor-in-Chief of Hermosa Tours. I'm making this distinction because I'm excited about Sedona as a mountain biker first. I also want to be very careful as some of the things happening are certainly on the fringe of legal trail building and I don't want anyone (namely the Forest Service) to get the wrong idea that Hermosa Tours is condoning or participating - so let's call this a friendly PSA between me and you. :)
OK, so disclaimer noted. The Sedona mountain biking scene is going OFF! I've always considered Sedona an "OK" mountain biking destination, but slowly over the last 5 or so years I've heard whispers of an entire system of user-built trails taking shape. I like that term, "User-Built". I had a chance to talk to one of the famous builders while I was in Sedona and he used this term. Interesting twist! Anyway, there are probably more user-built mountain bike trails in Sedona than there are Forest Service system trails. The great part? They're really really well built and designed. The best part? It appears the Forest Service agrees and they have slowly been adopting many of these user-built trails.
This doesn't happen very often. More often we hear of trails being closed for Wilderness, closed to perceived user conflicts or closed to development or resource extraction. But not here - it seems the trail system is growing by leaps and bounds and what still hasn't been brought into the system isn't being patrolled by snipers with infrared goggles. Generally it's casual.
The other thing I noted about the Sedona mountain bike trail system is the connectivity. I think it's potentially a great model for how a trail system should be designed. You can ride for hours and hours, right out of and next to town, and barely touch pavement. It's JUST SO COOL!
So as a mountain biker let me say - make a plan to get to Sedona for a riding vacation this year. Patronize the local shops and they'll be more than happy to help you find the user-built system and the recently-adopted system trails. You'll be glad you made the effort!
Posted by Matt McFee at 6:53 PM